If you are like me, you’ve discovered the delicousness that is Greek yogurt.
You’ve also discovered the sticker shock that comes with it.
$4 for a PINT???Â  It’s about the same as a pint of raspberries.Â  Neither of which price I understand.Â  Until I can grow my own berry bushes, I will settle for making my own yogurt. It is RIDICULOUSLY easy.Â  I was told it was not good to do with skim milk – BALDERDASH!Â  That’s the only kind I make and it’s delicious.
All you need is:

There are a lot of videos out there, but you really don’t need to use one.Â  Just use this recipe and have some time to fiddle in the kitchen and you’re golden.

Pour milk into a saucepan….or a giant pot.Â  Depending on how much milk you use determines how big the pot. :)Â  Turn heat on low and insert a thermometer.Â  Heat milk until it reaches 175-180ish degrees, stirring somewhat constantly. I say somewhat because you don’t have to stir it all the time, but if you leave it for too long, it will burn on the bottom and ruin the batch.

Once the milk reaches temperature, let it cool to 110 degrees.Â  Once cool, add a ladleful (or whatever) of the warm milk to the yogurt – stir with a whisk until incorporated.Â  Once done, dump back into the milk.Â Â  If you would like to add flavorings this would be the time to do so.Â  Take your milk still in the pot, and put it into the oven with the light on.Â  Leave for 12 hours.Â  Keep the thermometer in, because you do not want it to go below 100 degrees.Â  You can also be creative with this – put it in a crockpot surrounded by towels, or an ice chest, etc. as long as it stays warm.Â  “cooking” time can vary anywhere from 6-14 hours.Â  I use a solid 12 for mine.Â  Warm it up, throw in the oven, leave for the day.

Take your yogurt out of the oven.Â Â Â  You now have conventional yogurt with no additives or extra sugars!Â  To make it Greek, you have to strain it. 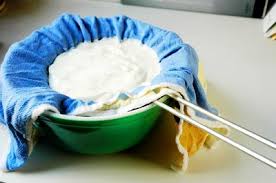 Take a colander and put it inside a large pot, so it fits inside. Line this with a dishtowel (one that hasn’t been treated with fabric softener).Â  Dump the yogurt in.Â  Put it in the fridge for another 12 hours.Â  The longer it drains, the thicker it gets.Â  After 12 hours or so the whey will have drained.Â  If you don’t have a use for it, pour it out.

If you’re looking for macros, I use the macros on Fage 0%, I figure it’s the same.

If you still want a video, this is how I learned:

I think what I’m going to do with my latest batch is throw it in the freezer and make “frozen yogurt”!