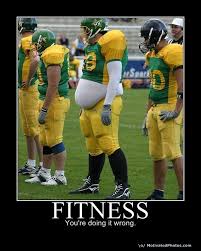 Last weekend, October 7-8, 2011 I spent two days at the NASM Live Workshop and my head is about to explode from knowledge and all the things I’m dying to share with you!

First off, let’s say my ego took a real blow. Back up; first off, I didn’t realize I HAD that much of an ego until I got there. Between struggling to do a single leg balance, figuring out what to do for my excessive low back arch compensation and getting worn out by STATIC stretches, then throw in finding out I was doing it all wrong….let’s just say I’ve been humbled. 🙂
To back track a little bit (and so my clients don’t start to look for another trainer) let me clarify by saying no, I don’t really mean that I’ve been doing everything wrong. You see, I have been training for years; I was certified by ISSA 3 years ago and this past year in January I received my NASM-CPT certification, no easy feat. Besides the comps for my master’s in music, easily the hardest and most stressful thing I’ve done. There is simply a TON of knowledge that goes into understanding the material, and the certification is just the basics to get you started!
I studied for my exam by reading the book, doing the workbook, watching the videos and listening to the audio, doing the flashcards, practice tests and all that, but not a lot of hands-on. That’s unfortunately because I’m a tactile learner, which simply means that 1)I’m getting started in building my business and since I’m on my own, not part of a gym, that means the building process can take longer (read, not as many clients as quickly) and 2) there’s a lot of information that you can forget.
It was really a lot of fun, especially watching the “meatheads” in the room get schooled on how they’re old bodybuilding myths (i.e. anything gotten out of Muscle and Fitness, or Fiction” as they called it) were full of error, not scientifically based and overall….wrong. The emotional teddy bears got snatched out of a lot of people’s hands.

What were the emotional teddy bears? Here are some:

And I could go on and on!
What were some of the main things I learned that I will be sharing?
Form
I thought I was a form-Nazi…until I went here. Then I realized how wrong my form was. My form is still better than 99% of the people in the gym, but was it optimal? Not until now. I will elaborate later.
Assessments
You need to assess everyone with whom you work with, and this is not optional. If not, you have no idea what compensations they have, what they are capable of, what you need to stretch, what they DON’T need to stretch,etc. Beyond the initial assessments, there should be CONTINUING assessments after each phase is completed.
The OPT Model
I have actually tried to stay pretty close to this with my clients since learning this, but my eyes were REALLY opened up to how effective it is and how truly difficult the first phases can be. Hypertrophy, max strength and power? No, those are the easy phases. Stability and strength endurance? BEYOND necessary. How necessary? So necessary that I will be scrapping my current program and going straight to Phase I myself, treating myself just like a beginner.
Pushups – you’re doing it wrong
This is where my former confusion of form comes in. First off, when I joined the military I did MASSIVE amounts of pushups. They didn’t care how you did them either, as long as you “broke the plane” and went past parallel. One drill sergeant told us to do wide pushups, because since you had a shorter distance to go down, they were easier, so I’ve been doing them that way for at least 8 years.
I’ve been reading up a bit on articles since then, and I thought you should keep your shoulder blades depressed and retracted during all movements, including pushups. Well, at this workshop I got schooled. Apparently, I am so jacked up from years of doing them “wide” that even though I could do them on my toes and all, I had a bad case of scapular winging going on and was told that I need to do them on a Smith machine and progress downward until I get my form righ, my core is strong enough and my shoulder blades move correctly (they need to move smoothly outward across my rib cage and back…mine want to just go up).
I”ll address a lot of these in more detail in later posts, but this is just a precursor to some of the amazing stuff I learned! I’ll be posting more as I go back through my notes, too. In the mean time, look at this list of stuff, does any of this strike a nerve with any of you? Leave me your feedback and let the humbling begin. 🙂