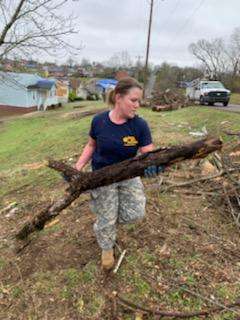 February 2020 – I heard rumor of some virus originating in China and I thought “big deal, it’s just like every other virus we’ve heard of in the past. What makes this any different than SARS, H1N1, etc? Not concerned”. I didn’t want to hear about it. Played at Mardi Gras with the Army band – what an incredible experience I’ll never forget (and the longest, most painful parade ever!), little did I know the world was about to completely stop.

Early March 2020, here in Nashville, Music City USA, we had just gone through an F3 tornado that took out a lot of our city. The following weekend there were a massive outpouring of community support to include benefit concerts around the city, food drives, people helping their neighbors and strangers dig out from under 80 year old trees smashing houses.

Our city came together like nothing I’d ever seen. The are where my church was located in Donelson was hit especially hard. I remember getting the call from the church asking for volunteers to help and I wanted to. I had a client at the gym that day, a violist who drove all the way up from Murfreesboro and when I told him what was going on he said, “can I help?” So he drove 45 minutes to help people he’d never met, dig out from destruction. Hauling wood was an excellent workout, so we thought.

Fueling up on peanut butter and jelly sandwiches the family provided (whw were they feeding US?) we went out to Mt. Juliet. You could literally see the tornado get stronger the farther it got from Nashville, tracing a line almost exactly parallel to I-40.

When I got to the church member’s house, I couldn’t believe my eyes. Across the street, I saw half a house, but only half…

…and one week after that it felt like even more of an apocalypse as the world literally stopped.

I heard rumor of things but never expected what was coming. As it was the end of the week, I needed some groceries. I was NOT prepared for what I saw….

You remember that whole thought of not buying more than you need? Well, I WAS a couponer, and right now I was coveting my former stash because I was shocked as you can see there was NOTHING. I remember picking up the last packet of meat on the shelf, boneless pork ribs….marinated that the next night and it was delicous! #smallblessings But I remember being absolutely shocked how people could go from helping their neighbor, to being so selfish, so controlled by fear and the media that this would happen.

The following week, I had the opportunity to support my community in the tornado cleanup and …

It was a ghost town.

All those thousands of people who were “there for their neighbor” had not only horded everything, now they were to scared to come out of their houses for fear of catching the virus.

This is where we take a second to remember science

And to call out stupidity.

Y’all, you do not catch illness from “the air”. Staying inside your house is more dangerous than not. Why? Several reasons:

I heard several cyclists on a forum last year (or was it this?) asking how they were dealing with not being able to ride…..WHAT? YOU DON’T CATCH ANY VIRUS FROM THE AIR, YOU CATCH IT FROM PEOPLE!

Cycling/running/rowing/biking/skating/kayaking/hiking are all activities where you can not only be safe, you can exercise, which increases your health and bolsters your own immune system, and you think it’s safer to stay in side?
Pardon my French but
WTF?

If this was ANY other virus would you do this?

So, I don’t swear and I DON’T think shutting down our economy is a smart way to beat a virus, but I basically did what I could, and a lot of you did: count our blessings and knock down that Honey-Do list.

I chose a long time ago to not listen to the news or watch TV, I don’t have cable, any of that. And that’s not some kind of badge of honor, but honestly,. I had no idea what was about to happen – and seeing this kind of fear mongering and hoarding behavior in my fellow Nashvillians repulsed, infuriated and exasperated me. And I was truly fearful for the first time about having food to eat. I had JUST cleaned out my pantry and freezer, and now there was no food? And the government was threatening to TAKE AWAY MY RIGHT TO MAKE AN INCOME???

That’s exactly what happened, and I’m STILL angry. THIS is why we signed the Declaration of Independence. No government has the right to tell us we can or cannot go to work but we still must pay taxes (Boston Tea Party anyone??? ANYONE??? Taxation without representation anyone????) and that was the biggest blow to my gut, the realization that working hard didn’t mean SQUAT. I suddenly was not allowed to do my job but yet, my property tax went up 36% because the government “needed it”?

We will never forget the surreal realization that the entire world was indeed shutting down.  Shows, concerts, tours, gigs, lessons, recitals, performances gone. We had to either cancel or find a way to transition immediately to online as a medium.

I had been talking about quitting teaching for a long time.

I starteded teaching flute lessons in 8th grade and I hadn’t stopped. I was TIRED. Tired of the unequal system:

I had been wanting to quit for a long time, but I had lacked the courage to do so. When the pandemic hit, I had been teaching online via Skype for over 10 years (which is why it boggled my mind this was such foreighn concept for so many) but when faced with sitting in front of a computer screen for 8 hours a day I said NO. Absolutely not. I am desinged for more than this….

And so I quit.

In April 2020 and took a leap of faith into the unknown that I WOULD figure it out. Now was my time.