This article comes from my former flute professor, Dr. Roger Martin, the Professor of Flute at Tennessee Techonological Unviersity in Cookeville, Tennessee, where I got my Bachelor’s in Flute Performance. During my last few years there, we knew he had started to develop a strange problem – his fingers wouldn’t do what he “told” them to do. We knew he was immensely frustrated with this and I am so glad he has written about his experiences. Focal Dystonia is a mysterious and much misunderstood problem and I reprint his article here with his permission.  You can find out more about the TTU Flute Studio by going to their website: ttuflutestudio.yolasite.com

They have an upcoming Flute Day as well, Saturday, February 2, 2013 with Guest Artist Katherine Kemler from LSU.  Exhibitors on hand will be J.L.Smith an Co, Carolyn Nussbaum Music and Pearl Flutes.

The week before I was scheduled to perform the Liebermann Concerto I began to experience a host of technical problems that had not been there before.  My left hand in particular felt wooden and unresponsive.  What’s up?!  I’ve already performed this piece four times!  In practice, I zeroed in on the problem areas and willed my fingers to do their job but feeling for the finger combinations seemed to increase the difficulty.  The day of the concert arrived and with desperate determination I forced my way through the performance. I subsequently made an appointment with a well-respected hand specialist who told me, Yes, from the symptoms you describe I would say that you have focal dystonia. I asked him if my condition would get better or worse and if there was a treatment, and he told me the symptoms would continue and there were no known treatments.

That was four years ago. I am still playing professionally, though with some technical constraints. I’ve had some very helpful coaching from David Leisner but largely this is a story of mind over matter. The key for me to staying in the game is a focus on tonal imagination. Mastering an instrument requires complicated physiological recipes and I realized that I had been splitting my attention about 50/50 between the sound I was producing and the physical sensations of creating it.  The dystonia pulled my awareness even further toward the physical but I began to realize that my technique worsened rather than improved as a result.  When I ignored my hands and put all my attention on hearing the motion of pitches there was some improvement.  It became clear to me that concentrating on the sound itself was critical.

I had been to a hypno-therapist in the past for help with control of nervousness during performance.  She explained that hypnosis could not make me do anything I didn’t want to but was just an umph for my best intentions.  Whether placebo effect or not, the session helped me with my nerves so I decided to put the technique to work on my focus of attention on sound.  I wrote a script for the hypno-therapist to read to me while I was under which said, I now hear each note clearly before I play it and allow my body to produce the music in the most effortless way possible. The act of setting my intention in a script may have proved as helpful as the manner in which it was delivered.

Now came the practice of truly hearing before playing.  I began by singing each passage with accurate pitch, checking myself by playing along on the piano.  At first, I took rhythm out of the mix and sang in long tones.  I realized that passages which were too fast for me to sing accurately at tempo still benefited greatly from this approach.  If I had a tendency to play a wrong note it was because I wasn’t hearing it accurately.  Another plus was singing melodic lines (in rhythm) with exaggerated dynamic shaping.  Back on the flute, I produced the shape much more easily than before I had sung it.

The next step was being able to hear a note in my mind’s ear while I was playing the note preceding it.  I remembered an exercise from Top-Tones for the Saxophone by Sigurd Rascher titled Tonal Imagination which deals precisely with this skill.  This is a long-tone exercise of ascending fifths and descending fourths (D-A-E-B-F#-G#).  Rascher prefaces the exercise with some important instructions, The deliberate imagination of a tone is as concise an activity of the mind as the imagination of a triangle with clearly defined properties, such as size, shape, color, etc.  In regard to a tone, such properties might include pitch, loudness, quality, timbre, stability, duration, etc.  To activate the mind to the point of imagining a tone in surrounding stillness is relatively easy.  However, when another tone is heard at the same time, this is more difficult.  He continues, In the case of our exercise, that means I play the D and, after having identified my tone imagination with this pitch, gradually (thinking, that is!) ascend to A. We ought to think this A so vividly that we have the experience of realistically hearing a fifth.  This accomplished  and not before  we change our fingering to play A. Tone imagination and acoustical sound must match.  The diligent application of this exercise can be a revelation into the true meaning of tonal imagination.  I apply it to whatever passage I am working on and practice imagining qualities of color, volume and vibrato once I can imagine the pitch, doing this in long tones before reinserting the rhythm.

Despite my best intentions there are times when I hit the wall of frustration, my internal dialogue turning negative and self-abusive.  Perhaps you have had the same experience.  Allowing the inner critic to run wild can become a habit that is debilitating.  I went through a particularly difficult time with this in graduate school when my inner voice never had anything positive to say. It finally occurred to me that the inner critic had value if I couldn’t imagine my playing being better, then I would never improve.  The challenge was putting the critic in perspective.  I couldn’t stand to tell myself that the way I was playing was good but I began to acknowledge when a passage was improving, that I was heading in the right direction.

This gave me a sense of there being light at the end of the tunnel and helped me to see my inner critic in a more positive way. A phrase I later learned from Eloise Ristad (author of A Soprano On Her Head) also helps me to fend off debilitating frustration, Don’t get mad, get information! 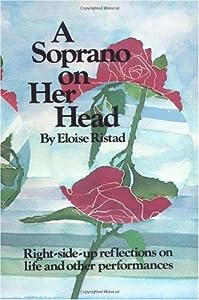 The issue of internal dialogue bears close examination.  In his book, The Inner Game of Tennis, Timothy Gallewey gives us brilliant insight into how our minds work with our bodies and if you have not read it, do so.  Most of us have had the experience of internal dialogue intruding during a performance, giving us directions on how to play mixed with judgmental comments and random thoughts.  It’s distracting and rarely beneficial. Let all of that internal verbiage go and focus on tonal imagination.  Easier said than done, right? This approach helps me – every time the inner voice intrudes, I think, Thank you, but listen to my sound. I return my attention to what I am hearing in the moment and to tonal imagination.  Calmly continue thanking your inner voice each time it steps in and shift your attention back to listening. No need to waste energy being aggravated by the inner voice, simply shift your focus again and again.  This has really helped me to improve my concentration during performance.

During practice it is imperative to examine how things are going, to stop and think about our goals and to formulate methods of achieving them.  Internal dialogue in this case is a given but I have noticed an insidious manner of addressing these concerns; we hear something we disapprove of and say, Don’t do that.  Don’t go flat on the release, don’t rush, don’t be sharp on the high note, etc. Ever heard of the philosophy, What you pay attention to, you get more of  It struck me that this habit of telling ourselves not to do what we don’t like is keeping our attention on the problem, thereby perpetuating it. Yuck, my sound is airy. Don’t be airy.  Is it still airy?  Yes.  There’s the air.  I hear it. Instead, say, Listen to the clear part of my sound. Give all the air to the clear.  Try it.  Train your internal dialogue to say what you want rather than what you don’t want. If you are a teacher, be aware of your phraseology when giving suggestions and make a point to move the students attention toward the actual goal.

In moving my own attention toward the goal of regaining fluid technique, focusing on my hands and fingers was counter-productive. Putting the spotlight of awareness on the feeling sensation of technical execution made things worse. Splitting my awareness 50/50 between the physical and the aural didn’t work anymore. So, if focusing on the physical didn’t help, I might as well try pushing my awareness in the other direction to see if this proved more beneficial.  These days, I constantly remind myself of the script, I now hear each note clearly before I play it and allow my body to produce the music in the most effortless way possible.  It is an ongoing battle but there is no doubt that I get the best results when I ignore the problem and focus on the true goal: sound. I can only suppose that this approach will prove even more serviceable to those with healthy hands.  Allow the observer part of you to step back and assess your own ratio of awareness on the physical compared to awareness of what you are hearing. Make a commitment to improving your tonal imagination. The results can only be rewarding.  –Roger Martin  January 2006